I picked up the saying from my mother (there she is again!) Well it stands to reason, as apparently it’s an old English proverb. It was most probably ringing in Winston Churchill’s ear when he spoke his now infamous, “We will never surrender” speech, in June 1940. My mum would have been a little scrap of a thing back then, quite literally. Born in the 1930s there would have been little to go around in the Depression years, and then of course World War II brought rationing. Her mum, my grandma Winifred, would have perfected the art of making the leftovers from the Sunday roast last another couple of days, the final meals probably consisting of Bubble and Squeak and Bread and Dripping. If you’re not sure, look them up. Quite yum actually.

It is that kind of resourcefulness in testing times that brought such brilliant comedy as Dad’s Army to our screens in the UK when I was a rather more rotund 10 year old; no more rationing, but quantities of carbs in the form of old English fare; Spotted Dick, Bacon Roly Poly Pudding. If not haute cuisine it was good for making wild kids replete and sleepy (as well as snigger at the unsubtle inuendo of the dish’s names). That show told us that determination pays off, even if you were poorly equipped and made a right arse of yourself in the attempt. I can’t claim that the message rubbed off, after all it seemed a little too absurd to be believed, but anyone who knows the story of Dunkirk will appreciate that it was civilians in their little fishing boats and small pleasure craft that provided significant support to the evacuation of Allied troops from the beaches of northern France.

So have we lost our resilience, or what Captain Mannering might describe as Spunk, Pluck, or Mettle (delicious descriptive words, but I don’t recommend their use in academic essays)? I do wonder are we becoming less brave in our safe little pockets of the world; safe in our air-bagged cars, our gated communities, our id checked, phone tracked, clingwrapped, hospital grade disinfected lives?

Jim Bright argues so well that I can’t add much value to his narrative that we need to become brave and step outside of our “comfort zone” in order to go places. He challenges us to pretty much strip off and jump into something unknown, like someone in one of those Indiana Jones movies who leaps down a bottomless pit. In fact, what comes to mind is Alice (in Wonderland). Doesn’t she eat an unidentified Fungi more than once, and jump down rabbit holes? No, that’s not what Bright is suggesting, however what he is doing is asking us to look at our situation and think about whether we are highly motivated or simply comfortable because we have settled in like feet in old slippers. He asks, “How can I learn new things and use my skills differently. How can I experiment and aim towards things that really matter to me?”

Many young students, the young man I spoke of at the start included, are looking at their grades and berating themselves that they won’t get into Cambridge or Melbourne University, because their year 11/12 exam results are an indicator that they are “rubbish”. If Churchill, or Captian Mannering had thought that way I wonder where we would be now, or at least what language we might be speaking. It would be great to avoid that kind of thinking and instead say, I can succeed. The result you need to go further in education is a decent Pass. After that you can look at the many options available and climb from there.

Think broadly, and think courageously. Do lots of research and if you get stuck, ask for help. After all, there is always a way. Jim Bright maintains that to keep repeating the same method of action, the same job, the same techniques time after time might be “a recipe to

being left behind”; not moving on. Try a new challenging, purposeful, determined recipe.

You could even give it a silly English name! 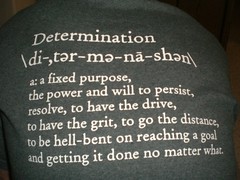 I heard myself saying this to a despondent young man the other day, and wondered how helpful I was being. Oh dear, questioning my own tips might be a troublesome habit, however it does serve to galvanise me into action to check on my sources and ponder the idiom. I picked up the saying from […]